Democratic Press Club is the world’s leading social organization for journalists. It serves its members through unity, awareness and cooperation among journalists. It enhances its skills through the changing needs of the global skills profession, its network of peers and social activities, through which it builds a significant media community in India and around the world. Due to the club’s office being in the country’s capital, it is easy to reconcile and the club is a strong supporter of press freedom around the world. The Democratic Press Club is basically a social organization of journalists as it is located at Press Lane, Central Bahadur Shah Zafar Marg in New Delhi and Old Delhi in the country’s capital. Close to the club office is the offices of most political offices, the Delhi Secretariat, the Delhi Police Head Quarter, the information centers of various states, including the offices of the various departments of the Delhi State and Central States. At the same time, the distance between Parliament House and other ministries, which are the areas of activity of journalists, is not too much. The idea of ​​setting up the Democratic Press Club was of the INN Today group editor-in-chief and senior journalist Dr. Fareed Chughtai. And efforts to implement this thought was of, Senior Journalist Saeed Ahmad, editor of Webvarta, editor of Prakash Bharti Iqbal Khan And companion in arms were senior journalist, Press Council member Ashok Navratna, Sanjay Sharma Amar Nath Tiwari, BP Gaur, Praveen Mathur, Ajay Mehta, Ali Hyder, Irfan Sheikh, Malik Imtiaz Kashmiri, Dr. Chandrashekhar Sharma, Vinay Chandrakar, Iqbal Mahadik. It was registered in the year 2019. Different journalists from different places of the country are joining day to day to fulfill the objectives of the club. You are also welcomed in the Democratic Press Club. The constitution of the Democratic Press Club ensured that the institute would work for media related activities. Membership of Democratic Press Club: Members and affiliates from various media (print, electronic, web portal, blogger, social media platform) can subscribe to it by paying a fixed fee. 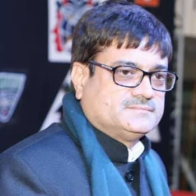 Dr. Fareed Chughtai, is a graduate from Kanpur University, Adeeb-e-Kamil from Jamia Adeeb Board, Aligarh Muslim University, Aligarh and MBEH degree holder from Lucknow. Dr. Fareed Chughtai is a Accredited journalist from the Press Information Bureau of the Government of India. Having served in various news organizations, Currently Is the editor of INN Today and Qaumi Aaghaz and are associated with the National Media Club, Press Association, Urdu Press Club. Mr. Chughtai has been the inspecting authority of Maulana Azad Educational Foundation, the autonomous body of the Ministry of Minority Government of India. Along with this, he has beautified the position of National Observer of National Minorities Development and Finance Corporation of Government of India and Member of Hindi Rajbhasha in Ministry of Minority Affairs. Mr. Chughtai has also rendered his services in the field of education. He has also been the principal of Zikra Public School in his district Farrukhabad. Presently, he is the political advisor of the prominent politician and former social legislator, Mrs. Louise Khurshid, and press secretary of former Union Minister Mr. Salman Khurshid's. Mr. Chughtai was honored with the Best Journalist Award by former Prime Minister Shri Atal Bihari Vajpayee at the Diamond Jubilee celebrations of the 1996 Hindi Literature Conference. Awarded for Best Writer by Shri Narendra Singh, Minister of State, Government of Uttar Pradesh, at the Farrukhabad Festival in the year 1998. He was awarded the title of Best Social Worker by Japan's Adhyatik Sahcharya Sanstha for better contribution in the field of social service. In Dr. Chughtai, the spirit of love for national literature was received from the family itself. His father Mr. Mustaqeem Beg Chughtai was a poet and Urdu writer and Uncle Maulana Hafeezur Rahman Mujibi was a famous poet, a sharp orator, writer and freedom fighter. From Farrukhabad, native of Mr. Fareed Chughtai, Mujib, an Urdu newspaper, was published before 1947. Apart from this Dr. Chughtai was a prominent social worker and philanthropist.

Dr. Fareed Chughtai - May 5, 2021 0
The continuing dark shadow of the second wave of COVID-19 continues to shroud our lives in a way never experienced before. Yet we have faced it with fortitude and forbearance, perhaps more than those in whose hands our national destiny lies today. When we come out of the deadly pandemic the world will be quite different, to begin with...
Read more
News

- December 5, 2022 0
Getting a research paper writer can be a fantastic method to cut down on time and effort in writing your own research piece. One of the best benefits is that you can order research papers online through an established business and have your paper written by a professional writer. The process of ordering a research writer An expert writer for...
Read more
Uncategorized

- December 5, 2022 0
Getting a research paper writer can be a fantastic method to cut down on time and effort in writing your own research piece. One of the best benefits is that you can order research papers online through an established business and have your paper written by a professional writer. The process of ordering a research writer An expert writer for...
Read more
Blogs

ABOUT ME
Democratic Press Club is the world's leading social organization for journalists. It serves its members through unity...